History of the Victorian Corset 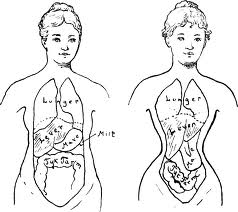 In the 1830's, the corset was thought of as a medical necessity. It was believed that a woman was very fragile, and needed assistance from some form of stay to hold her up. Even girls as young as three or four, and probably directed by the best motives, were laced up into bodices.
Gradually these garments were lengthened and tightened. By the time they were teenagers, the girls were unable to sit or stand for any length of time without the aid of a heavy canvas corset reinforced with whale bone or steel. The corset deformed the internal organs making it impossible to draw deep breath, in or out of a corset. Because of this, Victorian women were always fainting and getting the vapors. 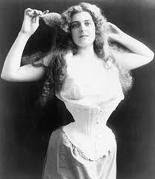 Women were thought of as the weaker sex, therefore their minds and bodies were weak. So the corset was deemed morally and medically necessary. Tight lacing was considered virtuous - a loose corset was probably a sign of a loose woman. To keep her innocence and virtuosity, a lady had to be chaperoned everywhere she went. She could not read or see any plays lest it excite her imagination. Even Shakespeare was thought unsuitable for ladies. A woman needed to protect herself from lustful men (and her own morality) by wearing heavily reinforced layers of clothing and tight corsets that made getting undressed a long and difficult task. 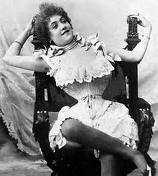 Working-class women (except when dressed for special occasions) did not go through the discomfort of wearing tightly laced corsets. They wore looser corsets and simpler clothes, with less weight. The higher up in class a lady was, the more confining her clothes were. This was because they did not need the freedom to do household chores. Paid servants took care of such cumbersome matters.

The corset is an interesting garment, which to most people in our modern world seems a very strange piece of underwear. We have all heard about the times when women were encased in long stiff corsets, reduced to nothing but objects of beauty, unable to perform any task. This is, however, only a part of the historical facts about that time - and about corsets.
When talking corsetry, the most interesting period of fashion is the period from 1820 to about 1910. But the corset is much older than that. In Europe, it has been in general use as an undergarment since the middle ages, but it probably dates several thousands of years back. The corset has at all times been used for shaping the body, most often for compressing the waist, but sometimes for raising the bust.
A compelling question is of course, how tightly were the corsets laced? There are many reports of waists between 18 and 14 inches - even 12 inch waists are mentioned. However, it is believed that most accounts of these very small waists represent fantasies. Measurements of corsets in museum collections indicate that most corsets of the period 1860 to 1910 measured from 20 to 22 inches. Furthermore, those sizes do not indicate how tightly the corsets were laced. They could easily have been laced out by several inches, and probably were, because it was prestigious to buy small corsets. 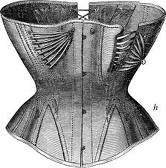 So ordinary corsets were not so tight after all, and contrary to common belief, the construction of the corset with the metal busk for front closure and the lacing in the back, enabled the bearer to lace herself in. She did not need a maid or husband to help her.
Severe tight-lacing was practiced, and some corsetieres specialized in cultivating very small waists. Some men developed a fetish for small waists, a fetish which was regarded as quite acceptable. Small waists and the corset probably played about the same role as the wonder bra plays today.

Finally, we want to weigh up the pros and cons of corsets:


-Asphyxia: they could not breathe very well with them.
-Sunstroke: women usually get sunstroke because of all the clothes they had to wear.
-Infertility: the corsets they had to wear were so tight that women had continually miscarriages, many of them remained sterile for life. Wearing corset was not easy for a pregnant women, they could lose their baby. In the "best" cases  babies came out deformed or with cardiorespiratory problems.
-Faints: many times faints were caused by getting a sunstroke, but in many others, faints were caused by the difficult task of breathing well.
·Pros:
Corsets were used to enhance women's figure and to enhance the bust as well.
Publicado por CNR en 11:59